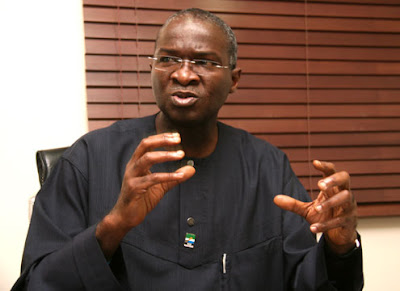 Minister of Power, Works and Housing, Mr Babatunde Raji Fashola on behalf of the Federal government at the opening ceremony of a 3-day Nigerian Pension Industry Strategy Implementation Road-map Retreat, said that  the government has pledged not to revoke any inherited contracts.

He added that the usual habit of reversing projects of previous government was wrong and not n the best interest of Nigerians.
He said:

“Newly formed governments begin a review of all contracts signed by their predecessors, cancel or frustrate them even when they are performing. What I am saying is that contracts cannot be terminated or frustrated on trumped up reasons simply because a new government does not like the affiliation of the holder of the contract,”.

He said the contract cancellation or revocation weakens the economy.

This is what he said :

It frustrates enterprise and leads to poverty and unemployment through job losses, loans taken from banks are endangered and the knock on effect is more than we often can see on the horizon, because the bad word spreads around the global investment community very quickly like wildfire”.

“The previous government has done something wrong, they did not adequately protect the interest of the people and so on. Yes it may be the case sometimes, that the past government did not act in good faith, or even compromised or was even negligent. The answer is not cancellation, if the contract is performing. The answer is renegotiation,” the Minister said.

“I am not saying that government must not terminate non-performing contracts. Indeed these are rights that are standardly provided in all well drawn contracts. This I think will enhance the reputation of the state or country or continent for honouring contracts and it is music to the ears of investors. Even then , I say, it must be sparingly resorted to, once the contract has been signed and is performing,” he posited