The immolation of a Jordanian pilot by the Islamic State group has brought a unified outcry Friday from top religious clerics across the Muslim world — including a prominent jihadi preacher — who insisted the militants have gone too far.

Abu Mohammed al-Maqdesi, considered a spiritual mentor for many al-Qaida militants, said the killing of Lt. Muath al-Kaseasbeh is “not acceptable in any religion.” He spoke in an interview with Jordan’s Roya TV a day after being released from more than three months in detention.

At Friday prayers in neighboring Iraq, where the militant group has seized territory in a third of the country, top Shiite cleric Ayatollah Ali al-Sistani declared in a sermon that the “savage” act demonstrates the extremists know no boundaries and violate “Islamic values and humanity.”

Religious groups, often at odds with one another over ideologies or politics, are increasingly speaking out in unison against the militants, who continue to enforce their rule in Iraq and Syria through massacres, kidnapping, forced marriages, stonings and other acts of brutality.

Iranian Shiite cleric Ayatollah Mohammad Emami Kashani claimed in his sermon that militant groups like the Islamic State are created by Western nations as a means for promoting “an ugly picture of Islam.”

Earlier this week, Islamic State militants released a video of al-Kaseasbeh, a Muslim, being burned to death in a cage. While the beheading of hostages from the U.S., Britain and Japan brought condemnation from most religious sects within Islam, the gruesome images of the airman’s slaying served as a unifying battle-cry for Muslims across the world.

Jordan joined a U.S.-led military coalition against the militants in September, but said it would intensify its airstrikes in response to the killing of its air force pilot. On Thursday, dozens of fighter jets struck Islamic State weapons depots and training sites, Jordan’s military said.

“We all stand united with the Hashemite leadership in facing terrorism,” one banner read.

It is unusual to see such a unified response from religious institutions, because moderate camps often represent drastically different views to those of hard-line minority groups. The recent attacks on journalists at the French satirical weekly Charlie Hebdo, for instance, brought a range of responses in the Muslim world, with many condemning the death of innocent people but disagreeing on whether the publication crossed the line in its caricatures of the Prophet Muhammad.

The Sept. 11 attacks in the United States spurred a hint of celebration and praise from anti-American radical groups, including al-Qaida, the group behind the hijackings, but condemnation from moderate Islamic factions. Now, even al-Qaida has grown more outspoken against the Islamic State group, which originally was an al-Qaida offshoot in Iraq. That criticism has left the IS extremists in an increasingly isolated position. 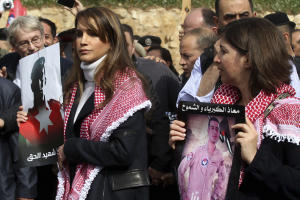 Even clerics aligned with the Islamic State group are said to be speaking out against the pilot’s killing. Rami Abdurrahman, who heads the Britain-based Syrian Observatory for Human Rights, said extremists dismissed one of its religious officials in Aleppo province after he objected to how the Jordanian pilot was put to death.

The religious official, a Saudi cleric known as Abu Musab al-Jazrawi, said during a meeting that such killings contradict the teachings of the Prophet Muhammad, Abdurrahman said. Other clerics in the meeting in the northern town of Bab began a verbal attack against the Saudi cleric, who was later sacked and referred to a religious court, he said. The incident could not be confirmed independently.

Many Facebook users in Bosnia posted pictures Friday of the Jordanian king in his military uniform, hailing his pledge to take a “severe response” for the pilot’s death. The head of Bosnia’s Islamic community, Husein Kavazovic, denounced the militant group, saying “there is no ‘but’ in condemning those crimes.” At least 150 Bosnians have reportedly joined the Islamic State group, and Kavazovic called on his government to strip them of their citizenship.

Al-Maqdesi criticized the militants for declaring a caliphate, or an Islamic state, last year in the areas under their control. Al-Maqdesi said such a state run according to Islamic law is meant to unite Muslims, but the extremists have been divisive.

Grand Imam Ahmed al-Tayeb, head of the world’s most prestigious seat of Sunni Islam learning, Cairo’s Al-Azhar Mosque, said earlier this week that the IS militants deserve the Quranic punishment of death, crucifixion or chopping off their arms for being enemies of God and the Prophet Muhammad. 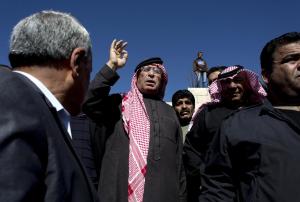 “Islam prohibits the taking of an innocent life,” al-Tayeb said. By burning the pilot to death, he added, the militants violated Islam’s prohibition on the immolation or mutilation of bodies — even during wartime.

Iraq’s top Sunni mufti, Sheik Mahdi al-Sumaidaie, said the crime against al-Kaseasbeh is “unprecedented,” adding that “the Prophet Muhammad said that only God can punish with fire.”

Pakistani Sunni cleric Munir Ahmed, in his sermon in Islamabad, also dismissed any theological basis for the crime, saying the “gruesome” death of the Jordanian pilot “is the most horrible act of cruelty.” It’s a punishment that “Allah has kept for its own authority and no human is authorized to do it,” Ahmed said.