Tennis ace,Serena Williams is enjoying her new found role as a mum to Olympian ..She took to Snapchat to show off their bonding session.

END_OF_DOCUMENT_TOKEN_TO_BE_REPLACED

Just one month after tennis player, Serena Williams welcomed her daughter, Alexis Olympia Ohanian Jr, she has showed off her tiny waist and slender figure.

She and her fiance, Alexis Ohanian, the co-founder of Reddit stepped out for their first outing without their little girl.

She uploaded footage to her Snapchat Story of herself and her husband stepping out  and wrote; ‘First day out. We miss her already,’

END_OF_DOCUMENT_TOKEN_TO_BE_REPLACED

Multiple award winning tennis champion Serena Williams who gave birth to her first child some days back, just shared the first photos of her baby girl.

Serena, shared the photos and a video of her cute baby girl, Alexis Olympia Ohanian Jr, she recently had with her partner Alexis Ohanan on September 1st.

END_OF_DOCUMENT_TOKEN_TO_BE_REPLACED

The news was first broken by a TV news producer Chris Shepherd on Twitter.

News of the birth came as her sister Venus prepared to go out on court at the US Open.

Serena had admitted to be pregnant to the world in April by accident, after mistakenly uploading a photograph on Snapchat.

She had won the Australian Open title this January while newly pregnant, “It’s the most outrageous pl

END_OF_DOCUMENT_TOKEN_TO_BE_REPLACED

Serena Williams bared her growing baby bump in her first ever pregnancy shoot. The 35-year-old tennis pro covers the August issue of Vanity Fair, wearing nothing but a skin-toned thong and belly chain for photographer Annie Leibovitz, and opens up about how she met her fiance, Reddit co-founder Alexis Ohanian and the baby they are expecting. 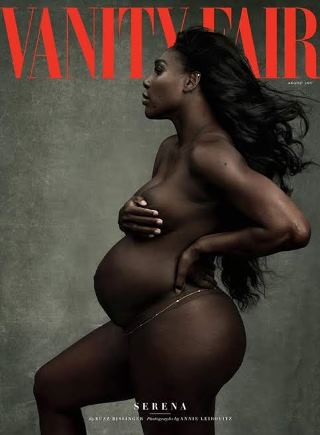 The couple first met at a hotel in Rome, Italy, when Ohanian, much to her displeasure, sat at a table nearby Williams at breakfast. She joked with him that there was a rat in an effort to get him to move.
“I’m from Br