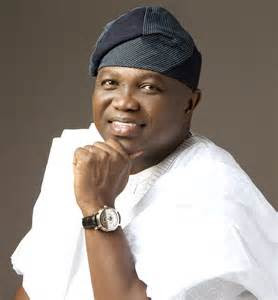 Lagos State Governor, Mr. Akinwunmi Ambode on Thursday restated his administration’s commitment to ensure that the Blue Line of the Light Rail Project is up and running by Dec. 2016.

Governor Ambode, who spoke at the 5th Lagos Corporate Assembly, a forum for public-private sector engagement held at the Banquet Hall of Lagos House, Ikeja, while responding to questions from captains of industries and members of the Organised Private Sector (OPS), debunked claims that work had stopped on the first phase of the project connecting Mile 2 to CMS, saying the allegation was totally untrue.

“The truth is, you might not see the contractors but they are actually working on the waters for now and by December this year, the project will start running. So, work is seriously ongoing,” Governor Ambode assured.

He said that government was also about concluding on the channelization of the waterways in Lagos to improve on water transportation so as to encourage investors and reduce the pressure on the road networks in the state.
He assured members of the OPS as well as would-be investors that the state is more than willing and ready to create an enabling environment for businesses to thrive with the overall aim of improving on the socio-economic wellbeing of the citizens.
The Governor said as a government, he was ready to partner with existing and would-be investors for industrial growth so far such investors are bringing value to the state.
While responding to issues raised by captains of industry and members of the organized private sector at the forum tagged “A+ Meets Business”, Governor Ambode said as part of measures aimed at encouraging investment, his administration created the N25 billion Employment Trust Fund to give soft loans to entrepreneurs just at three percent, while the Office of Overseas Affairs and Investments otherwise known as Lagos Global, the Office of Civic Engagement, as well as the Ministry of Wealth Creation and Employment Generation were equally established, all in a bid to promote investment opportunities.
He said as part of measures to further improve on the creation of enabling environment for businesses to thrive, his administration was also in the process of establishing Lagos Micro Finance Bank, which would go a long way in providing succor for business owners.
He said:

“As we speak, we are in talks with the Central Bank of Nigeria (CBN) on this and very soon we shall come up with the Lagos Micro Finance Bank and this is another effort geared towards the economic wellbeing of our people.”

Governor Ambode said that the government was also in the process of transforming the Kuramo beach into a World Trade Convention Centre, assuring that he was very much committed to showcasing the economic potentials of the state to the rest of the world.
Speaking on the strategy to drastically reduce traffic in Apapa and make life comfortable for people and businesses in the axis, Governor Ambode recalled the security tour he recently embarked upon to Ishawo and Oke-Oko creek in the suburb of Ikorodu where he met with military personnel carrying out the “Operation Awatse”, a joint military operation of all the security agencies to tackle the menace of pipeline vandalism in the Arepo axis.

“The idea is that when we open up the area and construct the Ishawo-Oke-Oko creek road to connect the Lagos-Ibadan Expressway from there, we would have greatly reduced the traffic gridlock on the expressway and then finally put a stop to the activities of pipeline vandals so that we can begin to directly pump petroleum products from Atlas Cove in Apapa to Mosimi, and then the tankers will have no business to come to Lagos to lift product,” Governor Ambode said.

The Governor, who spoke on several issues affecting businesses in the state, assured that he would work on perfecting a methodology for collection of rates, and that he would soon come up with a grand plan to permanently tackle the menace of touts.
On power, Governor Ambode said between now and 2017, he had an agenda to create clusters of Independent Power Projects (IPPs) across the state to improve on power generation and ensure 24hours power supply in Lagos.
Earlier, Lagos State Commissioner for Commerce, Industry and Cooperatives, Prince Rotimi Ogunleye, said the forum was a vehicle for government and private sector to interact and discuss issues that are germane to the industrial growth of the state.
He assured the private sector that the Ambode-led government was poised to assist the industrial sector to maximize its potentials for greater contribution to the Gross Domestic Product (GDP) of the state.
In her presentation, President of Lagos Chamber of Commerce and Industry, Dr. Mrs. Nike Akande commended Governor Ambode for programmes aimed at securing lives and property and encouraging economic growth, but urged the Governor to expedite action on the issuance of land titles, and also prevail on the Federal Government to fix the rail system in Apapa and relocate Tank Farms in the axis.
Also, Chairman of Apapa Branch of Manufacturers Association of Nigeria (MAN), Folaranmi Odunayo commended Governor Ambode on the Light Up Lagos initiative, and sought the inclusion of industrial areas in the project.
He also advocated collaboration between the Federal Government, Lagos and Ogun States in addressing the traffic gridlock and establishment of Building Code to control erection of structures especially along the expressway.
There were also presentations from the National Association of Small Scale Industries, DFID, representatives of Dangote Refineries, Nigeria-America Chamber of Commerce, Franco-Nigeria Chamber of Commerce, African Women Entrepreneurship Programme, among others.
SIGNED
HABIB ARUNA
CHIEF PRESS SECRETARY