Kanye West was on Power 105’s Breakfast Club this morning where he talked about everything from his ex-girlfriend Amber Rose, Tyga’s relationship with Kylie, Kim posing nude for magazines and more. Below are the highlights:

On Tyga dating 17-year-old sister-in-law Kylie Jenner:
“I think he got in early, I think he was smart [laughs]. They are closer in age than a lot of relationships that I know. I knew Tyga was smart.” Then he said, “I can’t speak on nobodies relationship.”

On his ex-Amber Rose:
“She’s just soaking in the moment. If Kim had dated me when I first wanted to be with her, there wouldn’t be an Amber Rose. It’s very hard for a woman to wanna be with someone that’s with Amber Rose. I had to take thirty showers before I got with Kim.”

On Kim sending him naked pictures while he was with Amber:
“I wish.” 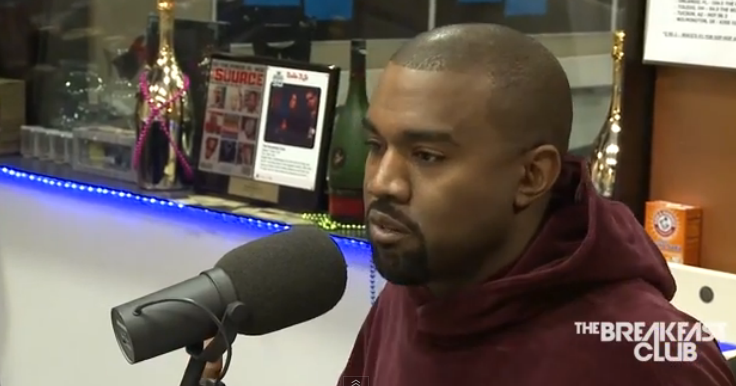 On if he thinks the Kardashian brand has hurt the Kanye West brand:
“No, it helped. It just shows my ability to bridge the gap.”

On having North West front row at his fashion show:
“No one can tell me where to have my child or not.”

On Beyonce & Kim K’s relationship:
“They love each other. They respect each other. When Beyonce is working on her album, she has pictures of Kim on the wall because Kim represents powerful women. Kim plays the ‘7/11’ video. Maybe there’s a LeBron James/Kobe element to it.”

On taking up for Beyonce:
“Beyonce don’t need no help. People look at Beyonce because she’s rich, a beautiful woman and talented and so they figure she has everything, so she don’t need nothing else. But I think she needs the proper accolades because she’s an inspiration.”

On Beck:
“The other day I went to dinner with Taylor Swift and ironically they were playing the Beck album. I was listening and I was like ‘Man, this is kinda good’.” He said he hadn’t heard the Beck album before for his rant after this year’s Grammys.

On why he chose to have Dame Dash present him the BET Honors Award:
“Because he presented me to the world and I wouldn’t have had a record deal if it wasn’t Dame Dash.”

On deciding to ride with Jay Z over Dame:
“It was an extremely visionary move on my part, to roll with Jay Z. I mention Dame in a lot of raps but the story is not done. It made more sense for me career wise to roll with Jay even though Dame had supported me. I wonder, where would we be if I had rolled with Dame. I came to Roc-A-Fella because Jay Z was my idol and it would have been hard for me at that young state to separate from my idol. That was a decision I made, do I say that there was some disloyalty in that? Yea, I’ll own up to that. Is it anything me and Dame can do together now to make money? Yea. We’re [Ye & Dame] going to work on films. Dame is like the original person who understood culture. You definitely have to say Dame is a real n*gga.”

On auto-tune:
“I don’t like auto-tune either, but I need it. I can bend my voice and other things and I like to do that.”

On his YEEZY 750 BOOST sneakers:
“I didn’t want them to be limited actually that’s something that the company did. I really wanted as many people to get them as possible. I don’t want the price to be $350. I don’t want to play this sneaker culture game. I just want people to have what I made.”