In an interview with Al-Jazeera TV which aired yesterday, President Jonathan said that he’ll not lose the upcoming Presidential election. He also said the increase in the activities of Boko Haram in Nigeria is not as a result of his mishandling of the group and that Boko Haram did not start with him. Speaking about Jega, the president said he’s never had any discussions with anyone to remove him. He affirmed that the elections will not be postponed again. Excerpts from the interview after the cut 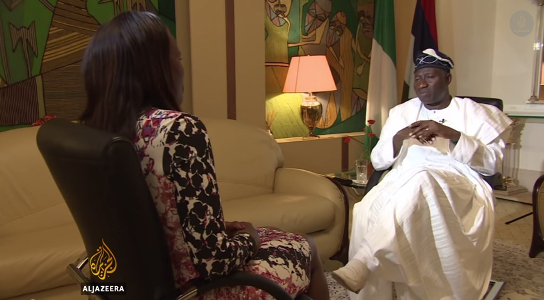 “I will not loose the elections” President Jonathan said when asked if he was scared of loosing the elections.
When asked what he makes of the insinuations in some quarters that the sudden step-up of military operations in the fight against Boko Haram was because he is scared he might lose the elections on the grounds of insecurity, he said;

“Its out of ignorance. In a political environment, if one party, particularly the ruling party is going to the left, they(opposition) would have to go to the right. They must find something. They must have something to tell the people”

Asked whether the elections will be postponed again, President Jonathan said

“I don’t think so. I believe the elections will be conducted as scheduled by INEC, that is National elections on the 28th of this month. I don’t see why we should postpone again because I am quite impressed with the successes going on in the north. There is a misundestanding about the postponement. In 2011 we conducted elections in Nigeria, we had Boko Haram. The fact is that within this period, somehow the level of Boko Haram within this period was quite serious and from all indications and from the signals the security agencies got, people are trying to use them disrupt the elections. In 2011 there was no such signals and if you disrupt the elections in a number of states especially for the presidential elections, it will affect declaration of results. So the security services don’t want to take any chances. They did not tell Nigerians that they must route Boko Haram 100% before the elections could be conducted but they want to degrade Boko Haram to the extent that they would no longer have the kind of strength that they would come out and disrupt the elections. That is the key thing. In terms of taking over our territories, yes we will take over all our territories and very soon there will be no part of Nigeria where they will erect a flag and say this is a Boko Haram territory. That we will do but what I am saying is that even if you do that, that does not mean you are inolated from terror attack. but gradually with improvement in terms of technology and monitoring we will able to bring it down. When we take over all the territories they are holding, they are becoming weaker, now we will improve our monitoring using superior technologies to monitor their activities, then we will begin to pick them and then of course frustrate their activities. So over the period, it will go. We cannot live with terror. No we can’t. We would stop it”

On whether he mishandled the seriousness and strength of the group, he said

“No it is not a question of mishandling. Boko Haram didn’t start with me”

On allegations leveled against him by APC Senators that he plans to sack Chairman of INEC Prof Attahiru Jega, he said;