Chelsea through it’s talisman Diego Costa derailed Arsenal’s title ambitions with a first half goal that really shook Arsenal’s defence and made Chelsea grab an unlikely win at the home of their London rivals.

It all started on a wrong footing for Arsenal after Chelsea’s Diego Costa was tackled by Per Mertesacker resulting in a red card for the German international.

Arsenal started without their main player Alexis Sanchez who wasn’t fit enough to start and after Mertesacker’s dismissal, Giroud had to compensate for a tactical shift, but make no mistake, Alexis Sanchez was thoroughly missed by the Arsenal squad. While Eden Hazrd didn’t start the game for Chelsea but came in later in the second half.
It was the seventh time in the Premier League that an Arsenal player had been sent off against Chelsea, not including Gabriel’s red at Stamford Bridge earlier in the season, later rescinded.
Gabriel, brought in to replace Giroud was barely on the field for a minute, when Diego Costa got across him to whip in a header into the net from an Ivanovic cross.

Arsenal had more possession after the red card and should be commended but Chelsea were the team who created more chances before the break and should have been another goal up after Willian found Diego Costa with a cross but Petr Cech as he has done often this season saved Arsenal at the near post with an instinctive save.
Before the half time interval Matthieu Flamini missed a goal scoring opportunity after a nice cross from Aaron Ramsey,but the former AC Milan player volleyed the ball in another attempt that can be nominated for ‘miss of the season’.

Nigeria’s John Obi Mikel was a maestro in the heart of midfield just like he has always been since Guus Hiddink took over from Jose Mourinho and one can only wonder why former Coach Jose Mourinho sparingly used him.
In the second half Arsenal introduced key man Alexis Sanchez and had opportunities to secure a point but they fluffed their lines.

Chelsea with Loic Remy on ,also could have gone two or three goals up ,but at the end would be satisfied with the three points gotten.
With Arsenal’s loss, Leicester City’s gap at the top of the table widened as they have 47 points while Man City (2nd) and Arsenal (3rd) both have 44 points. 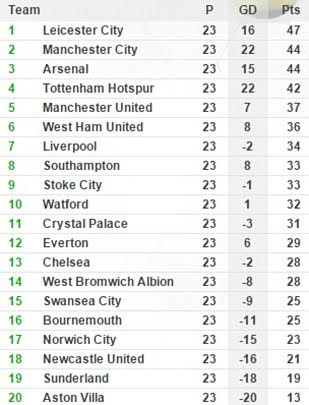