Donald Trump sarcastically responded Sunday morning to insults issued by North Korea that described the US President as a “destroyer” who “begged for nuclear war” during his tour of Asia.

The North Korean statement also referred to Trump as a “dotard,” a word meaning a very old person, and one the reclusive nation has used on him in the past.

“Why would Kim Jong-un insult me by calling me ‘old,’ when I would NEVER call him ‘short and fat?’ Oh well, I try so hard to be his friend – and maybe someday that will happen!” Trump tweeted.

and North Korea’s nuclear weapons program has been a major talking point with his Japanese, South Korean and Chinese counterparts.

“The weapons you are acquiring are not making you safer, they are putting your regime in grave danger,” Trump said about North Korea during an address at South Korea’s National Assembly in Seoul. “Every step you take down this dark path increases the peril you face.” 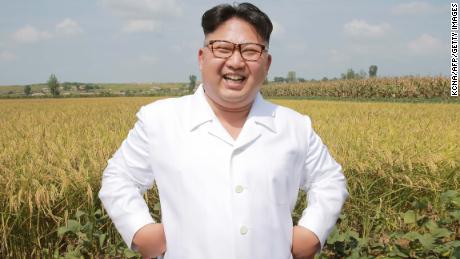 He called on nations to stop financing and trading with North Korea.

“Together we have in our power to finally liberate this region and the world from this very serious nuclear menace, but it will require collective action, collective strength and collective devotion to winning the peace,” Trump said.

North Korean officials, who said they’d be watching the visit, were quick to fire back Saturday. Pyongyang described Trump’s trip as “nothing but a business trip by a warmonger to enrich the monopolies of the US defense industry.”

“Trump, during his visit, laid bare his true nature as destroyer of the world peace and stability and begged for a nuclear war on the Korean peninsula,” the statement said.

The harsh words between the leaders have escalated in recent months after North Korea threatened to launch missiles toward the US territory of Guam.

Trump has previously warned the isolated regime would “face fire and fury like the world has never seen.”

During his trip to Asia, Trump attempted a symbolic stare-down of Kim this week at the heavily fortified border that separates North and South Korea. But heavy fog forced the cancellation of Trump’s plans, and he was forced to turn back.

The US on Saturday began a three-carrier strike force exercise in the Western Pacific. It involves the USS Ronald Reagan, the USS Nimitz and the USS Theodore Roosevelt. The exercise, set to continue through Tuesday, will involve operations to show the Navy’s ability to operate multiple carrier strike groups as a coordinated effort, the Navy said in a release.

This is the first time three carrier strike groups will have operated together since 2007 during an exercise off the coast of Guam, according to the Navy.