Controversial singer, Naira Marley has declared May 30th as the day for his fans, also known as, “Marlians”.

It all started after popular Disk Jockey, Cuppy, shared on her Twitter handle that there is the need for a National Marlian day. Naira Marley, the leader of the group, then proposed every May 30th as the day to be set aside as a national Marlian day.

Ace singer, Wizkid joined in on the action with a humorous, “Government approved”. See the tweet below. 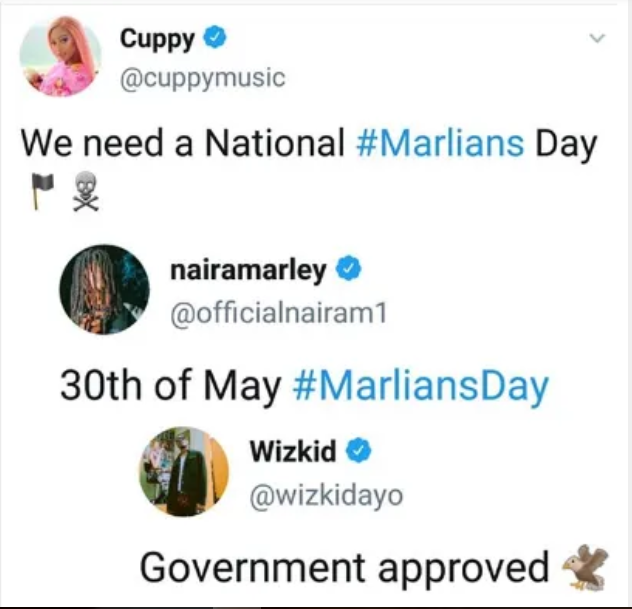 Meanwhile, a Chief Magistrates’ Court in Lagos on Monday, December16, ordered that Nigerian musician, Adeyemi Fashola, popularly known as Naira Marley should be arrested and arraigned over alleged car theft.

READ ALSO: This guys makes up to 300,000 Naira monthly by begging – Addict

The chief magistrate, Mr Tajudeen Elias, ordered that the Investigating Police Officer (IPO), Sgt. Sunday Idoko, handling the case must present Naira Marley in court on the next date of adjournment.However, two of the musician’s brothers and his cousins appeared in court over alleged theft of a car and a cell phone.

The defendants, Idris Fashola, 18, Babatunde Fashola, 24; and Kunle Obere, 22, are facing a four-count charge bordering on conspiracy, stealing, assault and obstructing the arrest of Naira Marley.The chief magistrate granted the three defendants N500,000 bail with two sureties in like sum.

He ordered the IPO to produce Naira Marley before the court on Dec. 21, when the case would be listed for further hearing.The prosecutor, ASP Edet Okoi, told the court that the three defendants committed the offences on Dec. 16, at Eko Hotel Roundabout on Victoria Island, Lagos.